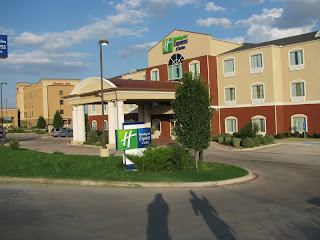 We had dinner at a great restaurant last year and were hoping to eat there again.  Thankfully, it was still there and the food was as remembered. 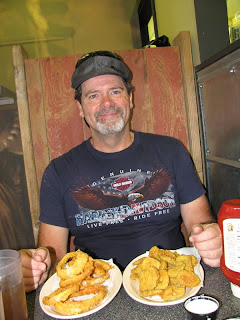 We talked to the waiter and  he told us about the T. Boone Picket windmills that are in Sweetwater. 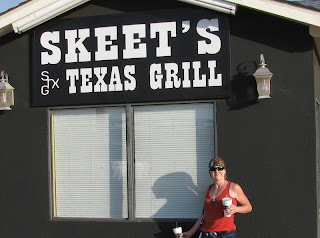 He is going to school to be a technician on them.  Very interesting conversation.  As usual this fist day was spent just trying to get across Texas into another State. Texas is one big place. Since nothing of real interest happened today I thought I would just list some of my thoughts and a few things I've learned while riding.
1) As George Strait says in the song, "It's amazing what a man can see in the light of a burning bridge", therefore always remember you can see some very beautiful sights in your rearview mirrors.  Sometimes the view in the mirror is just as gorgeous as the view facing you, so don't forget to look back once in a while.
that being said....
2) When you see a truck with a gooseneck trailer parked on the shoulder of the road of a two lane road and he is parked, keep both eyes on him. At the last minute that guy in the big truck WILL decide to just cut to the left real quick and cross all of the lanes to go to the small road on the other side. So, as Jim Morrison says, "Keep your eyes on the road and your hands upon the wheels."
3)  Sometimes even with your shield down on your helmet a fluttering insect will make it's way between your lips and your microphone.  It will feel really strange because at first you won't know what it is. Once you do figure it out blow really hard and it will be on it's way. As Alice Cooper says "Along came a Spider, Crept up beside her, Spun his web deep inside her, My darkness will guide her", so glad it wasn't a spider....I think.....
4) If faced with a buffalo on the road, slow down and lay the bike down. Period. No, there was not a buffalo in the road, but we did see one on the side of the road so we naturally discusssed the possibility of it actually being in the road.  Hey, when you've been greeted by Old Dan from "Where The Wild Fern Grows" and he ran  at you straight down the lane in front of your bike you seem to want to prepare for these possibilities. I like to be prepared. Molly Hatchet says, "I'm driving down the road and I'm flirting with disaster", well, yeah, every day.....I live for it...
5) I have found if you concentrate too much something may happen to bring your mind back to reality. Like a big rock hitting you right in the fingers.  *It doesn't matter what Kris Kristofferson was thinking about Janis Joplin when she made "Bobby McGee", yes my mind wanders...

6) Eighteen wheelers actually have blind spots. When passing them on the left, move to the left side of your lane. Passing on the right? Move to the right side of your lane. If you can't see their face in their rearview mirror they can't see you.  Also, be nice to them. This Country depends on truckers to operate  believe it or not. Think of how your stuff gets to Walmart. Also, they are nice, helpful, and remember, they have a lot of friends. :)  And CB Radios to call for help for you.
P. S. - Don't ride their ass, as you might end up under it.

7) Most bikers are so very nice.  Some are just downright rude bastards. Especially the ones that have their motorcycles in the back of their pick-up trucks.

8) When you see two doves perched on the top of a fence above one of those white crosses on the side of the road that means something.  It's not just two birds.

9) As you pass by a small girl with blonde hair sitting on a wood fence in a very small one-horse town you should wave at her. She's just looking at the traffic go by, probably waiting for school to start and has nothing to do, just thinking. Remember, you used to be that small blond girl sitting and watching the traffic go by dreaming of what you wanted to do when you grew up. You might make her day if you wave. (and by the way, i'm damn well doing what i was dreaming of back then!) 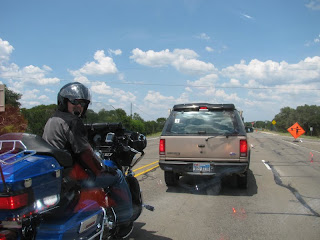 10) If you happen to come upon some construction on the roadway and you are first in line how about chatting with the flagman?  He has a hard job and you just might make his day too. Can you imagine how much shit he has to put up with every day with people yelling at him because they are mad they have to stop?  Sometimes people just like to talk.

11) As you pass by a military base that has had a tragedy, Fort Hood, Texas, you may get a tear in your eye but that is okay. It's okay to remember that the reason we are all free is because others are willing to give so much.
I saw soldiers there saluting one another as I drove by.
Remember.

Take the world in a love embrace

Fire all of your guns at once
And explode into space