Memorial Day Should Be Every Day 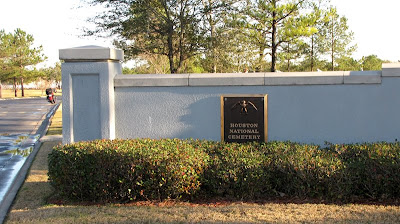 Have you ever tried to drive a motorcycle with tears in your eyes? That is exactly the fate that I met a few weeks ago when I drove into Houston’s Veterans Memorial Cemetery. I had gone there to do a favor for an online friend by taking a few photos for him. There are some Major League Baseball players buried there that were also in the military. Frank Russo of The Dead Ball Era lives in New York and can’t make it to all of the cemeteries that he would like so I offered to photograph some of the graves here in the Houston area for him. While driving in I viewed a sea of wreaths that had been left on the graves since the Christmas holiday. The wreaths were placed on each of the graves by volunteers. Something about those wreaths touched me in such a way that I just can’t describe. I was overcome with emotion as I drove into the cemetery. Seeing all of those white monuments lined up was enough, but the wreaths….wow. 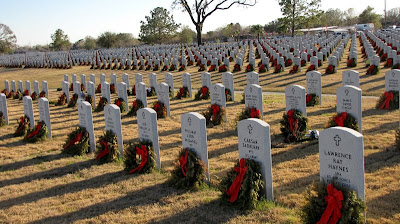 I continued my journey into the cemetery and went to the grave locator. It was a very windy day and it was beautiful outside. After locating my graves I set out to get the photos. Our nation’s veteran’s cemeteries are very well organized. As an experienced graver this is something I can appreciate. I have been to many a cemetery in my time, and trust me; you can spend vast amounts of your day searching for one grave, let alone two or more. As I found the first of my graves the chimes of the chapel started to play. The music was very beautiful ranging from religious in nature to patriotic tunes. It was nice just to take in the nice weather and music. I know that some don’t understand the enjoyment that we gravers get with our hobby of graving. It is quite hard to explain. It is almost like paying respects to those who have gone before us, although we may not even have known that person. Additionally, we help each other. I was helping Frank that day, and the circle goes round and round as one day he might help me or someone else will help me when I need information or photos taken. The genealogy world is a large one and we do tend to help each other in a large number of ways. One of the places we tend to get information is in a cemetery. Additionally, I just feel a great sense of peace walking among the beautiful monuments. It gives me time to think and reflect. Sometimes we forget to do that as we go about our daily lives. Once in a while we need to be reminded of the things that should be important to us along life’s journey. Where better than a beautiful cemetery?
After completing my task of finding the baseball players on my list it was on to visit an old friend of mine and Jerry’s. John and Jerry worked together at the Houston Fire Department in the Safety Office. John worked for UPS as well as the Fire Department. Firefighters often have two jobs. For John, that was UPS, and I’m sure he was great at it. 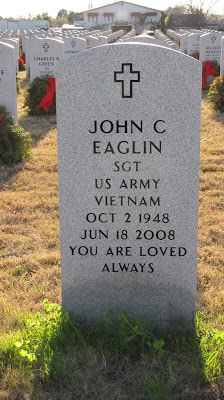 John was also a Vietnam Veteran. He was actually lost in Vietnam for a short period of time and he had to rely on himself and his skills to survive. He was found by his platoon one day – that is how he made it home. I consider John a hero. I know that John would never have considered himself to be a hero. He was too humble for that. But as a person who wore a POW/MIA bracelet for many years, those are my feelings on the subject. I am thankful that his name did not end up on a bracelet or The Wall. I found John’s monument, took some photos and reflected on the times we were able to chat. I’m sorry he had to leave this life so early.
I realize that not all of the monuments in Veterans Memorial Cemetery are not for Veterans who were killed in the line of duty. However, they did serve their Country. Therefore, they deserve our respect. Pro-war, Anti-war, it does not matter what our opinions are, these soldiers did what was asked when called. While walking through the cemetery you will see so many stones with young soldiers. I was so humbled. I was so thankful. I was so sad. I felt fortunate.
If you ever doubt that you live in a Country worthy of your respect all you need do is go visit your local Veterans Cemetery. I think it will give you the proper perspective. It will let you know that there are people willing to risk everything for you. We may not always agree with the methods, but so far they seem to have worked. We are safe. 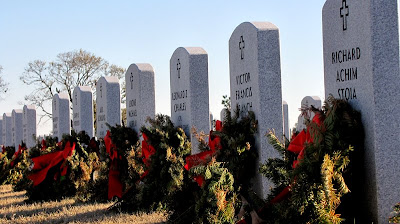 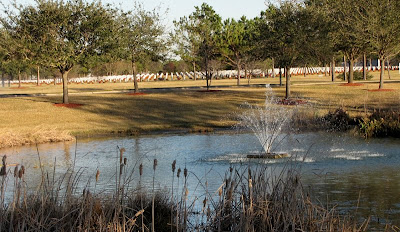 My Aunt Mae gave my mother a letter from one of my ancestors. His name was Carl Cockerham.

Just a line to let you hear from me so you will know I am well.

I received your xmas card yesterday. It sure is a nice one. I am glad you sent me the Bible. I was sure in need of one. The one I had had just got ruined when my hole flooded with water. It rained for two days and nights and flooded every body’s hole. I got a lot of equipment wet hiding my Bible. You can send me one large in size to read if you want to.

Say can you tell me where mother is staying now?

Say, granny, I don’t write much because I don’t have sufficient stationary that shouldn’t keep you from writing. I like to get mail as well as anyone else. It is pretty hard for me to write much anyway.

What is Johnnie and Jim doing these days? I hope they never have to come over here.
Well, grannie, I will have to close for tonight and write to some one else. I don’t know when I will get a chance to write again. In closing I want you to pray for me. I need it.

Lots of love and best wishes.


Unfortunately, Carl didn’t get to write to my Great- Grandmother again. He was Killed In Action on April 25, 1945. It is very hard for me to read the words that Carl wrote to my Great-Grandmother. I did not know Carl, I was not even born then. But I can just imagine the way my Great-Grandmother felt when she heard that her Grandson had been killed in a War, far from the home where he had grown up. It must have broken her heart. For that I am very sad. I tear up every single time I read his words. It just kills me to think of him digging a whole in the ground to stay safe, reading the Bible there and the rains coming and making mud of his safe haven. Those are the sacrifices soldiers are willing to make for me and for you – to keep us safe from harm. There was another soldier in our family. He served in Vietnam. John Westley left when I was young. But I remember that time so well. It was a time of unrest in our Country; a time of sadness and pride in our family. He looked so handsome in his uniform I thought. Thankfully, his name is not on a Wall and his name did not end up on a bracelet on my or someone else’s arm. His name is not on a monument somewhere. Thankfully. He returned, to me, a hero, because he was willing to go when asked. Again, I think of a grandmother. This time, mine. Was she thinking of her mother-in-law, Julia? Of her receiving the news that her grandson Carl had been lost in a Country far from home and wondering if she would suffer the same fate? Wondering if she would lose her first born grandson to a foreign land? I’m so grateful that did not come to pass. Perhaps because of John Westleys service or maybe just because of the time in which I grew up I have always been well aware of the sacrifice.

I wore a POW/MIA bracelet for a special soldier. His name was Lieutenant Colonel William Lawrence Deane. Sadly, after being MIA for many years he is now buried in Arlington National Cemetery. I have a dedicated page on The Virtual Wall for Lieutenant Colonel Deane.

I wrote a poem for Lieutenant Colonel Deane. It is on his Virtual Wall page.

I went to see the Wall again today,
"Etched in stone" is the phrase they say.
A special name to me is known,
A certain soldier who never came home.
A bracelet I wear on my arm
Hoping with remembrance that will keep him safe from harm.
I speak his name and wish him well,
Never knowing if time will tell.
Will he be found or gone forever?
His spirit will live on through the years
Even as we all shed many tears.
His name is here on the wall for all to see,
This great big Wall,
A sad memory.

You may visit it here:

And on Findagrave here:

To visit Houston Fire Fighter and Vietnam Hero John Eaglin you can follow this link:

For more information on Houston National Cemetery follow this link: 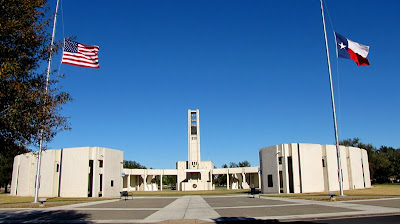 I find it interesting that through the fiscal year of 2008, 67,793 of our Nations heroes are resting in these hallowed grounds in Houston, Texas. 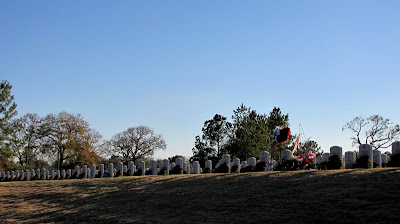 The wreaths that I have mentioned are placed each year by volunteers and provided by the Worcester Wreath Company. 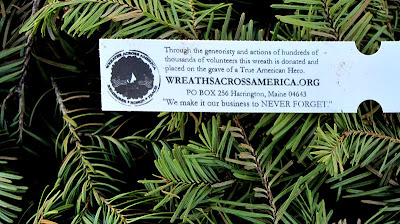 Read more about the program here:

I will be at Veterans Memorial Cemetery in Houston placing wreaths this year for this wonderful program. I want to help honor these veterans.

To see baseballs greats that specifically served in the military follow this link:

Again, I would like to finish this blog by saying that if you want to feel proud of this wonderful Country that we live in and enjoy each and every day, you might try making a visit to your local Veteran’s Cemetery. It will certainly give you a new perspective on things. I feel it does me each and every time I step onto those blessed grounds.

Happy Memorial Day ~ 2009! Remember your loved ones and remember our Nations Heroes.
Posted by juwster at 4:32 PM