While visiting Joshua Tree we went to visit the World Famous Crochet Museum.  The museum was founded by Shari Elf who also created the Art Queen Gallery. It is located in an old Fotomat building. Although it is very tiny inside it holds many treasures! She does not crochet the items located inside. She has collected them through the years and people still send them in to be added to the museum.

We visited on a rare rainy day in the desert. The clouds were grey and dark. But to me any day in Joshua Tree is a good day! 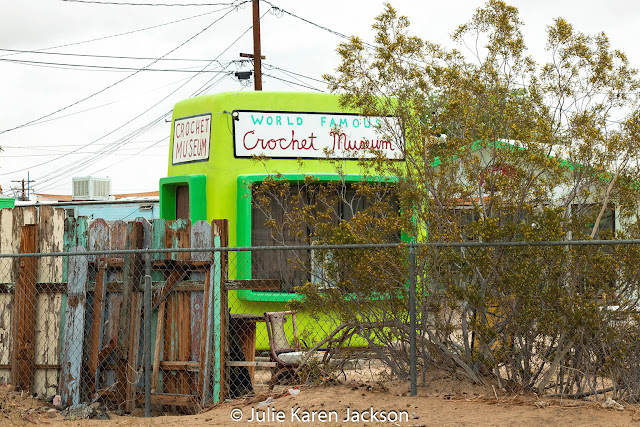 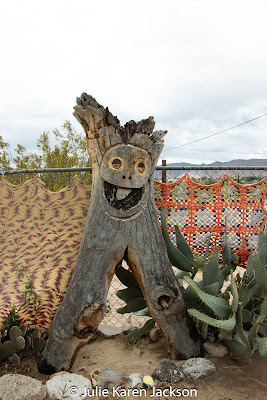 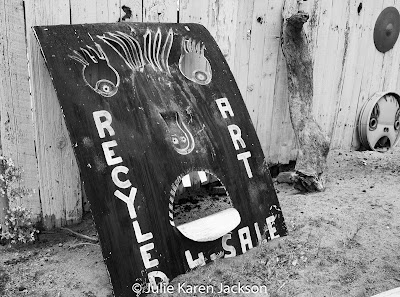 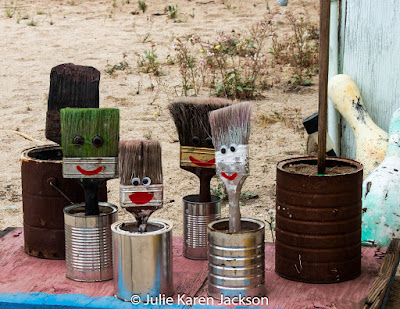 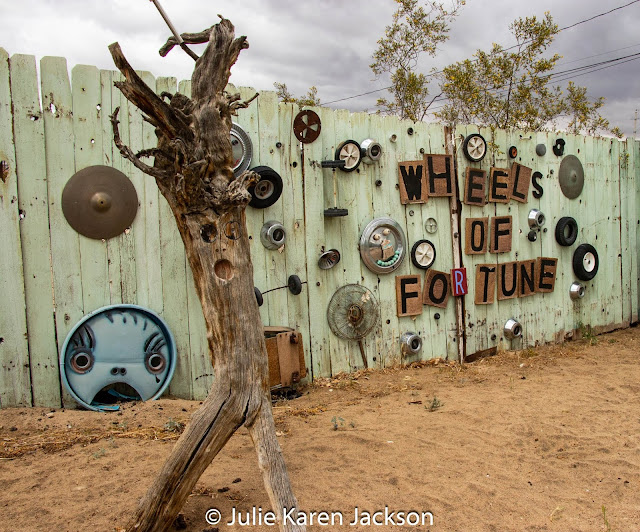 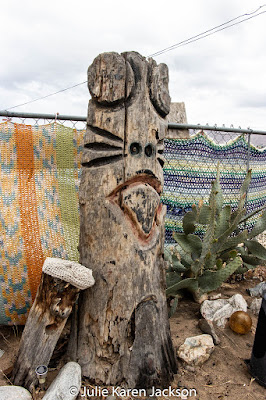 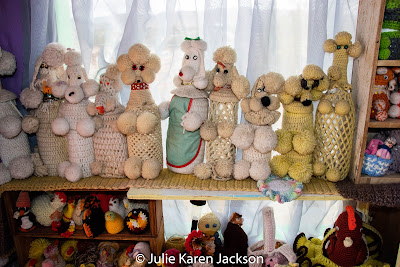 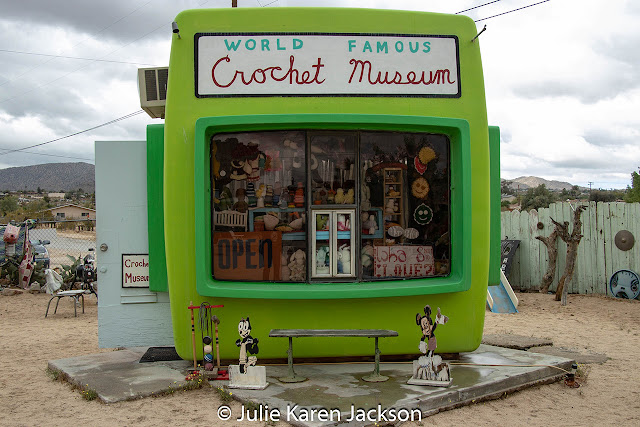 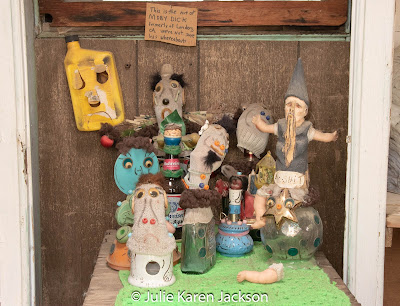 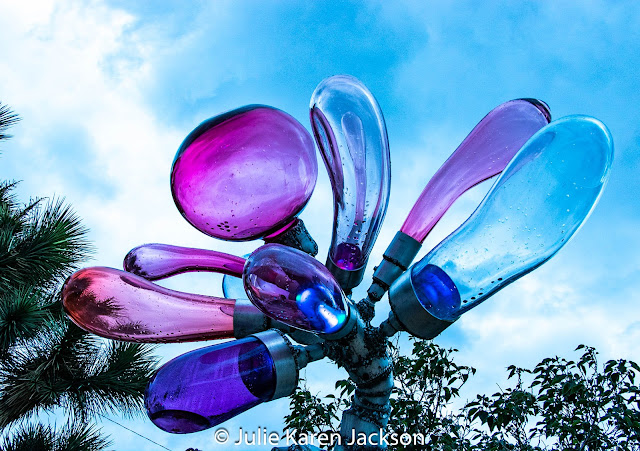 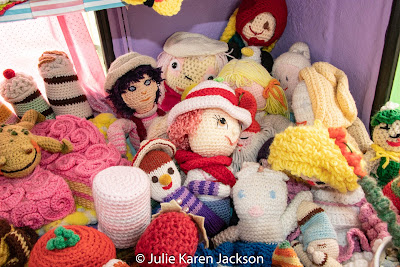 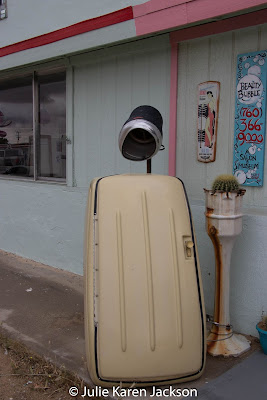 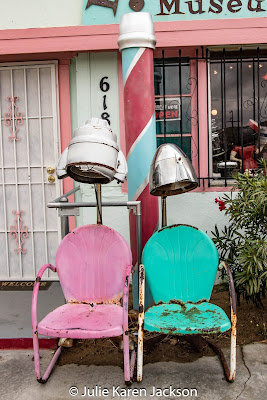 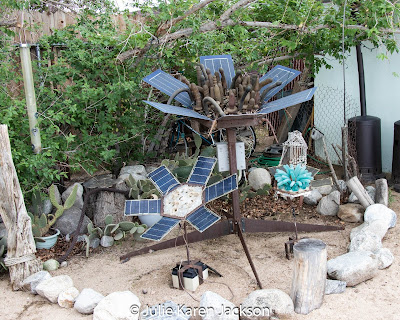 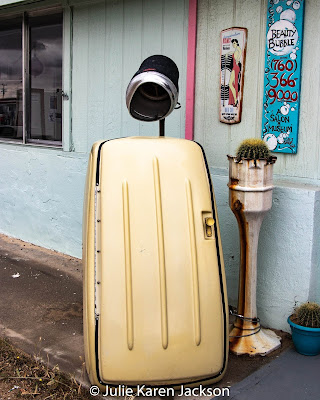 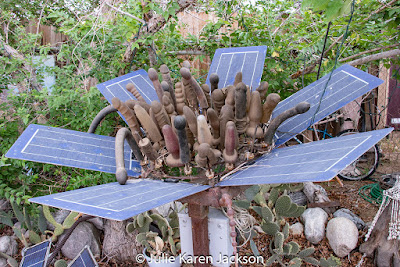 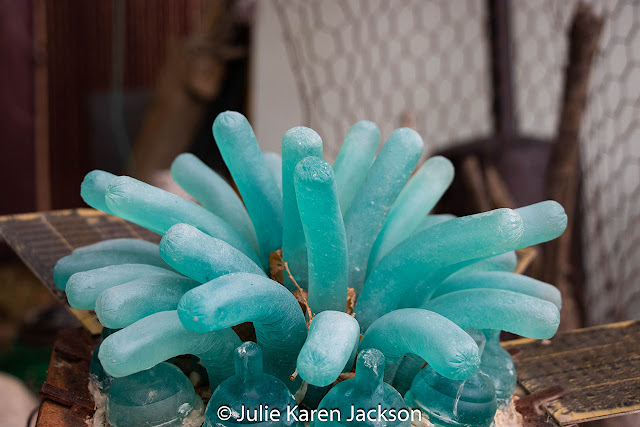 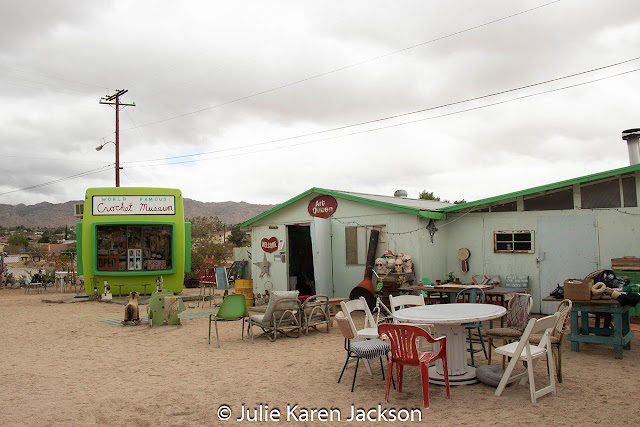 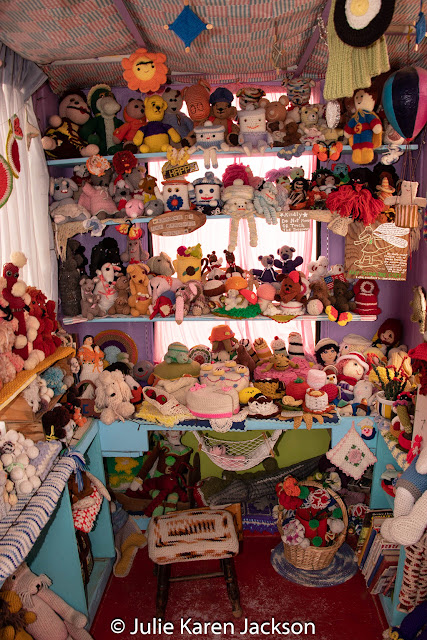 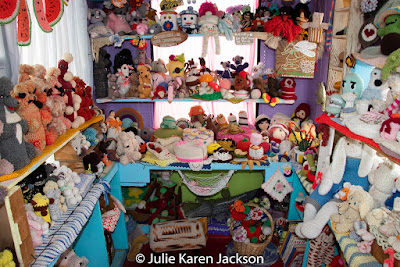 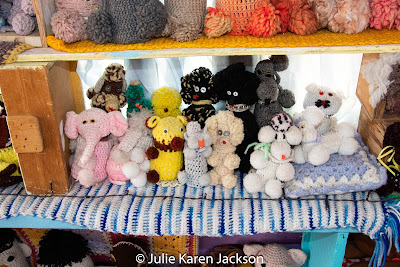 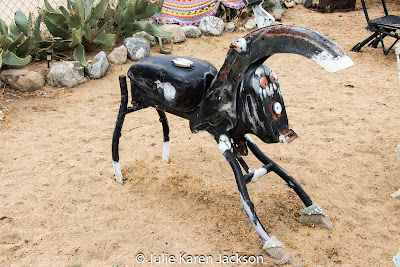 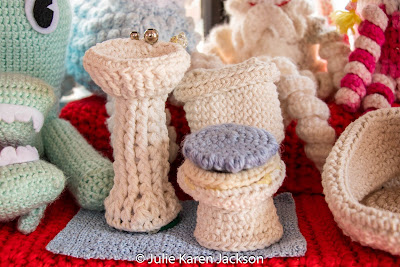 Posted by juwster at 6:18 PM No comments: Links to this post

The Woodlands near Gosling and Research Forest Drive

Bluebonnets And Wildflowers of 2015 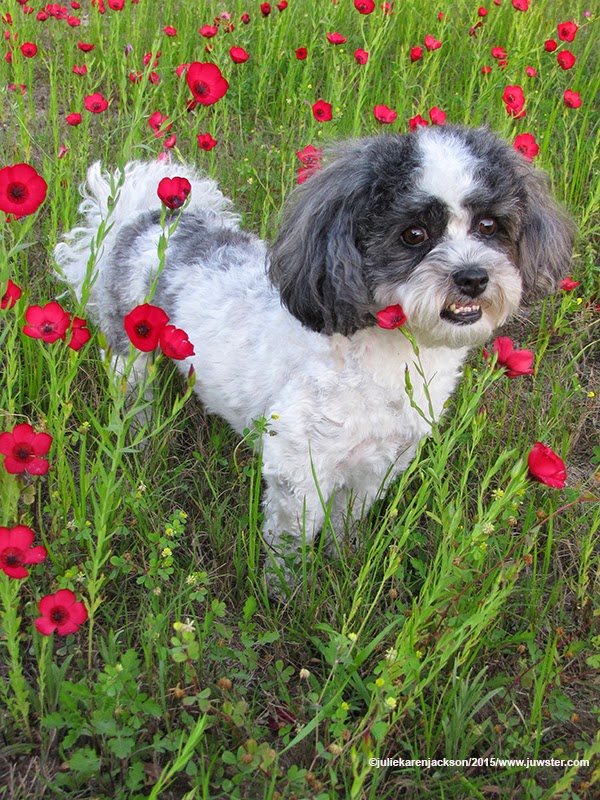 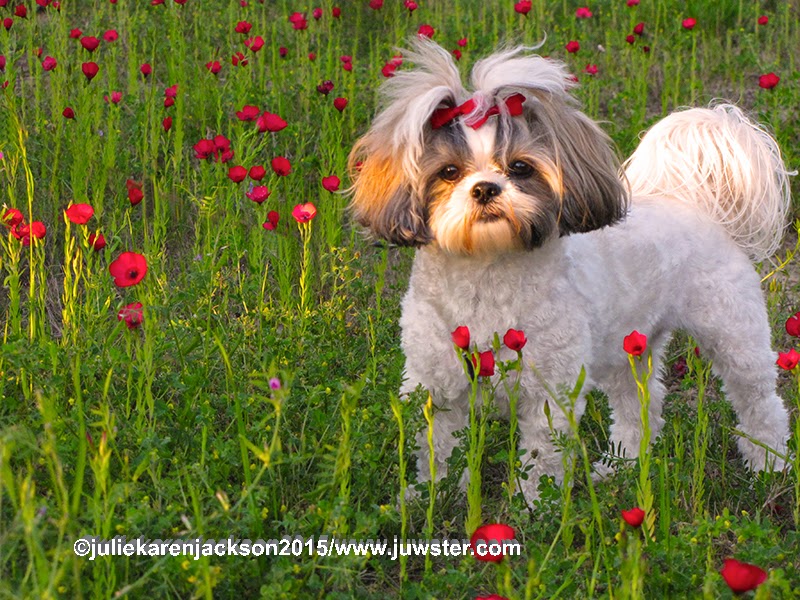 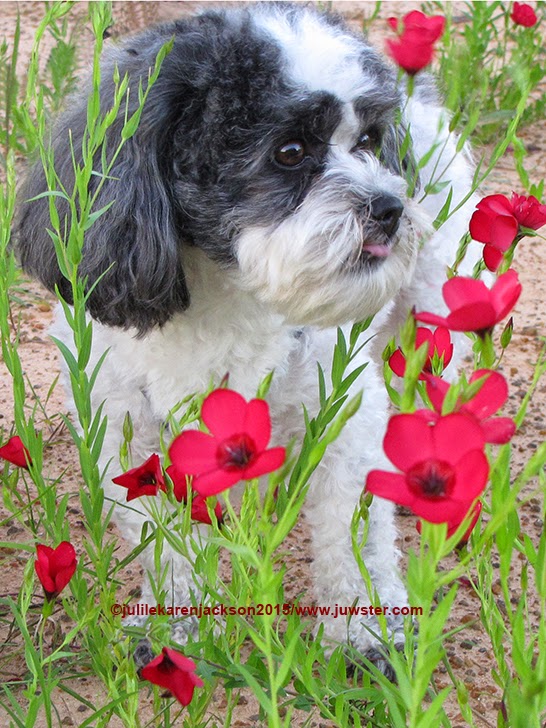 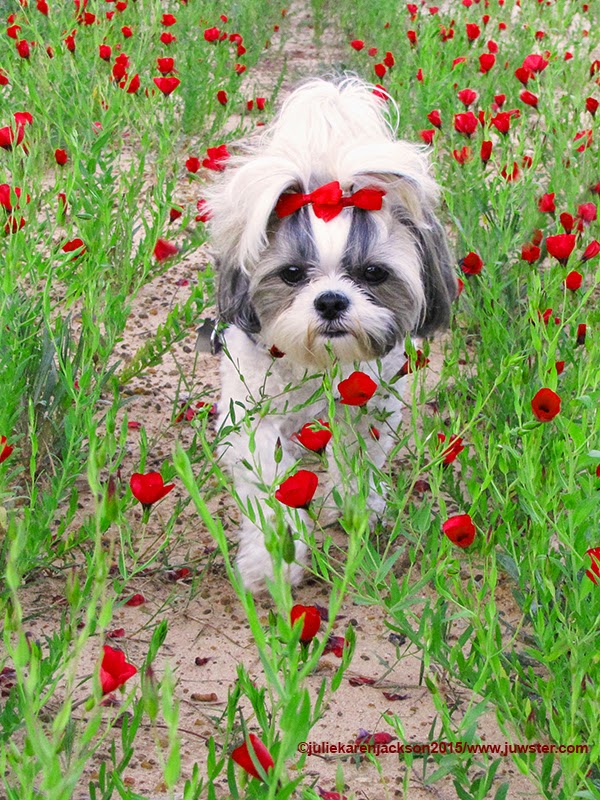 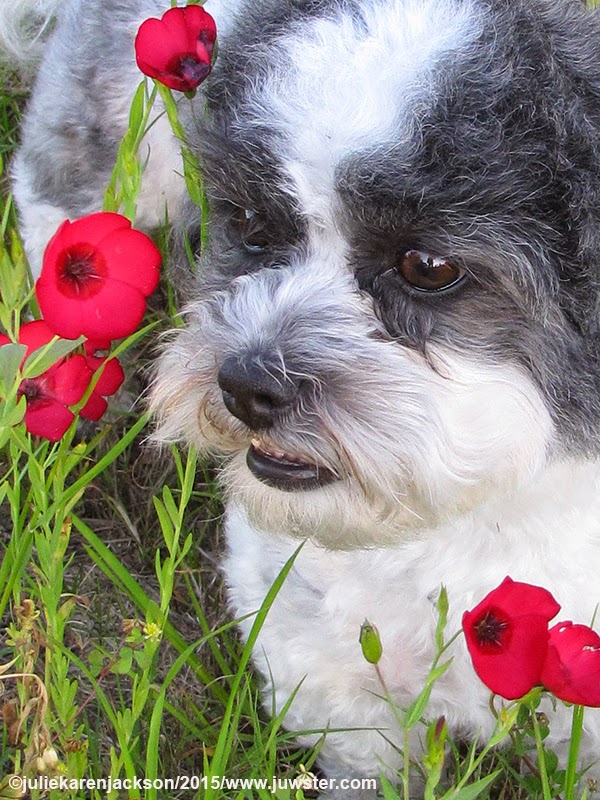 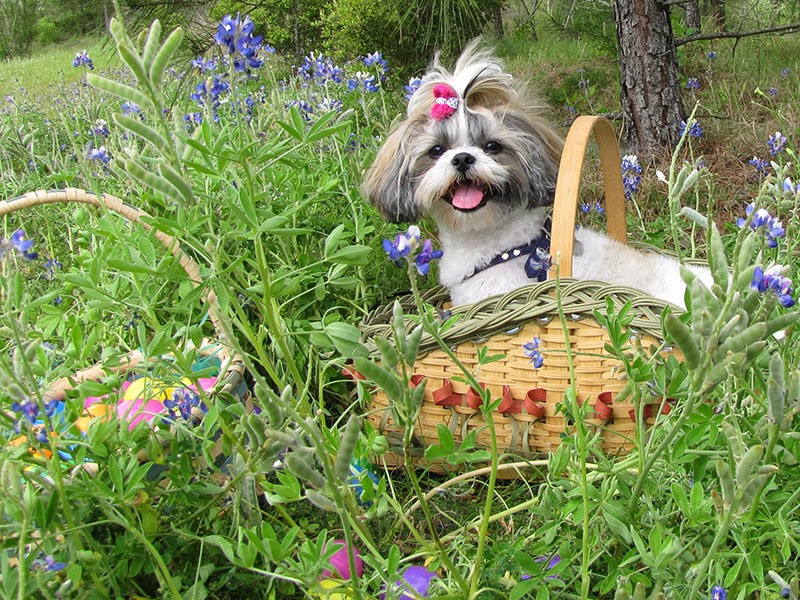 Posted by juwster at 2:11 PM 2 comments: Links to this post

I hate this road and I am never going back.
I did, however, meet a man named Spirit that I will never forget.
Which only proves that every road in life has a reason. 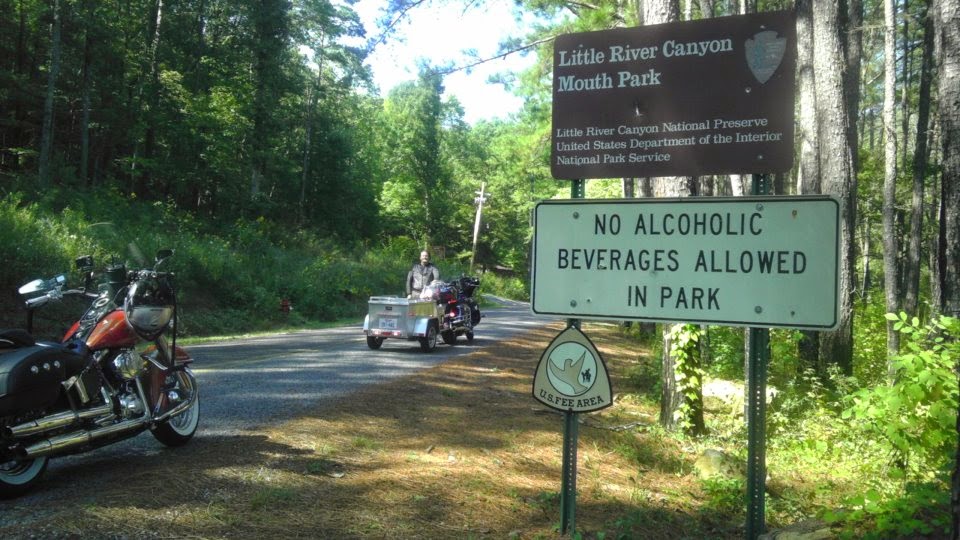 But a few weeks before she left this universe we had a conversation. We talked about her plants. She loved plants. Flowers, trees, vines, herbs, just about anything would grow under the careful tending of her hands. She always had that intuition of what each plant needed at a certain time. Oh, she studied as well. She had many books on the different varieties of plants that she grew or wanted to grow in the future. What information not found there would lead to a trip to the nursery to discuss soil or proper feeding techniques. Although privy to many of these discussions I always had the impression she just instinctively knew.  As far back as I can remember our back yard looked like a plant nursery. Back in the 1970's when macrame hanging pots were popular we had many. Ours were filled with huge ivy and various other plants plentiful with leaves and flowers.

I never had the gift of helping things grow. I never got the formula correct. It was always too much or too little of this or that. I ended up with pitiful dried up pieces of dirt. Many times she would come and help me get my yard presentable. We would dig and get the flowers just right. I had limited success. But I learned a bit along the way.

So she had some amaryllis bulbs and had previously had limited success with them. She had decided to get two huge bags of Miracle Grow potting soil and just put the bulbs in there and see what happened. It was an experiment of sorts.  That was part of our conversation.

A few weeks later she was gone.

While at her house picking up some things, one of them being plants, her husband took me beside the garage and showed me two huge bags of potting soil and asked if I wanted them. I told him I knew exactly what there were, and yes, I did.

I took the bags and planted them in two pots.

The next Spring, 2004, I waited. Would anything happen? Would they bloom?  Finally, the first bit of green appeared above the dirt. A sign. There was life. The experiment had worked. Those bulbs were going to make it. And they did bloom.  One red, the other pink.
And they have bloomed every Spring since then. They have multiplied. I have divided bulbs and put them in different pots and given some away.

I can't help it. I get excited to see the first signs of green popping through the dirt every year. Then when the bud starts it is amazing. When the flower blooms it is wonderous. To others it may just be a flower in a pot. Not to me.

Sometimes the simple things in life can take on a whole different meaning. The bloom of a flower can be like a sister tapping you on the shoulder and saying,

We only have to be observant of our surroundings to find the blessings laid in our paths each day.

The flutter of a butterfly. The song of a beautiful red cardinal. The soulful eyes of a wondering dog that crosses our path. A rock shining more brilliantly than all the others. That one brighter star in the sky at night.

We are only left alone if we chose to ignore our blessings.

And that is why I am back this morning having another delicious Manske Roll! This one with some Blue Bell Homemade Vanilla Ice Cream.

Manske Roll opened in September 1906 and they still cook their buns fresh each day. You can certainly tell the difference in the quality. Their buns are soft and sweet. It's the actual dough that has a slight sweet taste to it. The cinnamon rolls are not too sweet. Even their hamburger buns have that slight sweet taste. The burgers come in four sizes which is great. And on Mondays you can get two 1/4 pound burgers for $2.00.

This was another good find from Diners, Drive-In's and Dives.

juwster
I live with my soul puppy, Parsons and my new baby puppy, Joplin. My husband and I love to travel on two wheels, he on his 2011 Harley Ultra and me on my 2008 Harley Softail Deluxe. Ride and travel - that's what we love to do. Spending time with family is important in our lives as well. Photography is a longtime hobby as well as grave hunting. I like to document our travels and make photographic memories of the great things we have seen and the awesome food we have been able to experience. Music is vital to my soul and is a big part of our traveling life. Alice Cooper was a large part of my life growing up and continues to be a huge inspiration to me even today.