Several nights ago while I was trying to go to sleep I was struck with a very vivid memory. One that was so sharp that it seemed as though it was a flash of something that happened just last week. However, this was an event that happened many, many years ago.
I was just six years old when my mom and I were visiting my grandmother, my dad’s mom. We must have gone over there that day when I got out of kindergarten. I had morning kindergarten. I hated it! I was always one who needed a little extra sleep in the mornings and I really didn’t like having to get up so early to be at school. This was a feeling that would never pass. I will admit I still have it, although in the last few years I have found it is getting ever easier for me to get up earlier in the morning. I attribute this to the fact that my night mate – my sister – is no longer here to keep me company at night. We did that as children as well as adults. We kept each other company while the rest of the world slept. No matter what the time 2 a.m., 3 a.m., 4 a.m., it really didn’t matter, I always knew I could call her and she would be up too. We just loved the night. We loved the night creatures, the sounds, the moon, the stars and everything about it. After a time, when she was no longer here for me to talk to at night it was so lonely I learned to sleep at night and be awake in the day like most so called normal people do. But I digress. 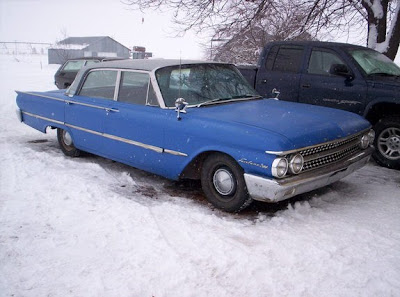 My mom had a 1961 Ford Fairlane 500. It was white.
I used to stand up by the post between the front seat and the back seat.

There were no seat belts back then.
Of course, there were no real safety standards.
I just love standing there. I was always so short that I fit perfectly in that spot and my head did not touch the ceiling of that car. The windows were usually rolled down – no air conditioning – and I loved to feel the wind in my face and hair. (shades of the Harley rider of the future!) Also, I had a much better view of everything. Again, I was short. With that big huge car I could hardly see out of the windows when I was sitting down.
After visiting my grandmother that day we were headed home. We were coming through the underpass at Little York Road and Highway 59. For some reason my mom made me sit down in the seat.
A man ran the red light on the feeder road and hit our car. The impact was in the exact spot where the post was in the car where I usually stood. I don’t remember much about the incident at that moment. The next memory I have is of a man. We were going down a hall, I was looking up and he was carrying me. There was a lot of blood. The man had dark hair and a moustache. My next memory is of laying on a table and several faces looking down at me. There was something in a plastic type bottle being sprayed on my forehead. I must have asked them or either they just told me that I was getting stitches. For many years I thought that stitches were a liquid matter that was spread out of a plastic bottle. I don’t remember how old I was when I finally realized the difference. I do know that my dad showed up to the hospital at some time during all of this, I remember seeing him. They had put around 60 stitches in my forehead above my left eye by the time we left for home that night. Over the years my forehead would be tender in that spot.
There was something nagging on my little mind after leaving the hospital. Earlier that day we must have stopped somewhere and I had gotten a toy from the gum machine. Those of you who are younger may not know that in the old days you could get some really cool toys from the gum machine. One of those things was an uber cool plastic pocket knife. Well, folks, that day I had scored one. But on the way home I discovered that I no longer had it. I was obsessed. My head hurt, but I wanted my knife, my prize. You see, my dad was my hero and he had a pocket knife and now I had one - so I needed that knife. After getting settled at home I must have looked a bit down in the dumps. Other than just the usual ‘you’ve just gotten 60 something stitches and been in a wreck’ down in the dumps. So my dad being the ever observant person that he is asked me what was wrong. I told him of my troubles. The pocket knife from the gum machine, he said? Yes, that one, it’s gone. *sniffing* - then and now – Oh, it wasn’t gone he told me. The man that had carried me into the hospital had given it to him! He had told him that I was holding it even after the wreck. He had thought I may be looking for it later so he gave it to my dad. It was on the dresser in my mom and dad’s room. I went and retrieved my bubble gum pocket knife. I was so happy!
I don’t remember how many days I missed from school because of the wreck but I know that I did missed some days. My forehead healed up just fine and now you can just barely see a very fine line there as a reminder of the event.
The Soap Opera “The Young And The Restless” went on the air in 1973. In 1974 the character of Phillip Chancellor, II changed to Donnelly Rhodes. 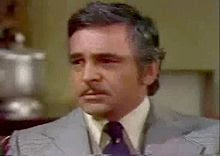 When I saw Donnelly Rhodes on that show I thought that he was an exact replica of the man who had carried me into the hospital the day of the wreck. That is just what he looked like. This was about 7 years after the wreck and that actor reminded me of him. I wonder what my rescuers name was? To my knowledge we never heard from him again and we didn’t know his name. I think in my mind since I never knew his name I thought of him as a Philip.
I think that was my first lesson in how a simple kindness can mean so much to someone else. I mean, the man really didn’t have to worry about saving my pocket knife for me. He really didn’t have to carry me into the hospital either I guess. I’m sure there would have been emergency workers there sooner or later. I do not know the circumstances of why he took me. I’m sure he had things to do that day. This really must have been an interruption in his day. But he took the time anyway. What I do know is that over the years I have thought of the wreck and I have remembered the knife, obviously I have had a passing thought to the man who carried me into the hospital but I have never had such a vivid memory like I had a few nights ago. I wonder if he ever thought of me?
Sometimes strangers pass through our lives and leave an impression. The reason may not be known, but I’m sure deep in the scheme of things there is one.
If you wonder how much of an impact this unknown stranger had on my life, perhaps you could ask my son – Philip.
Posted by juwster at 10:32 PM